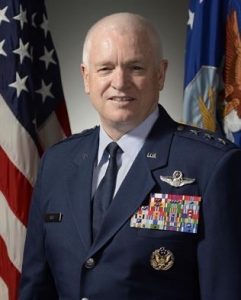 It is with great pleasure that we can announce Lieutenant General L Scott Rice the Director, Air National Guard, the Pentagon, Washington, D.C., as a featured guest speaker at the 10th Anniversary Gala Dinner event on Saturday, October 24th, 2020.

Lieutenant General L. Scott Rice is responsible for formulating, developing and coordinating all policies, plans and programs affecting more than 105,500 Guard members and civilians in more than 90 wings and 175 geographically separated units across 213 locations throughout the 50 States, the District of Columbia, Puerto Rico, Guam and the Virgin Islands.

Lieutenant Gen. Rice was commissioned in 1980 through the Reserve Officer Training Corps at Rensselaer Polytechnic Institute, Troy, New York, and graduated from undergraduate pilot training at Reese Air Force Base, Texas, in 1982. He is a command pilot with more than 4,300 hours in the F-111 and A-10. Before assuming his current position, Lieutenant Gen. Rice served as The Adjutant General and Commander, Massachusetts Air National Guard. He has served in various operational and staff assignments including Commander, Air Force Forces, Exercise Eastern Falcon in United States Central Command. He has commanded a squadron, operations group, and fighter wing. He also served as the Assistant Adjutant General for Air, and Commander, Massachusetts Air National Guard.

The 54th Massachusetts Volunteer Regiment of the Massachusetts Army National Guard Ceremonial Unit will present the colors at our Gala.

The Beacon Street Band will be playing at our gala event. Beacon Street is Boston’s best band playing today’s hits and the classics.

A BIG Thanks to our sponsors: